The jet lag definitely made it difficult to get up for my first full day in Ireland. After breakfast, we had the first of many lectures we would have over the next few days about Ireland. This lecture happened to be on the Irish economy and the Celtic Tiger. After it was over, we had time to venture outside Trinity for lunch.

The streets of Dublin

Walking the streets of Dublin is a very interesting experience. First of all, there are always a lot of tourists here. About 4.6 million people live in Ireland and there are more than 6 million tourists annually. This, combined with the crazy way people drive here (and in Europe in general) is probably why they paint “look left” and “look right” on the crosswalks. I couldn’t help but think that New York City, or any other American city for that matter, would never be so accommodating to its European visitors.

We eventually found a cheap café for lunch and ordered paninis, which turned out to be a mistake because the Irish have a very different idea of paninis than I do. They put it on a weird poppy seed roll and even put stuffing on it! Neither of us were big fans of this interpretation, so we went to the Spar’s across the street afterwards for candy. (Spar’s is basically the Irish version of a 7Eleven.) They take their chocolate seriously here; the store had a whole area just for “luxury chocolate.” Some of my favorite candy here so far are Aero Bars, Malteasers, Galaxy Bars and Mars Bars. With apologies to Hershey, the chocolate really is much better over here.

We then went on the walking tour of Dublin, which was very interesting and helpful in getting our bearings. There is so much history in Dublin everywhere you look. The only cities I can think to compare it to in the U.S. are Boston or Philadelphia, but even those cities are only hundreds of years old, not thousands. Some of the tour’s highlights were the Bank of Ireland, the Temple Bar area, Dublin Castle, the new Dublin City Council Building, the Four Courts and the Liffey River.

There were some flags flying by the river, which our tour guide said were there because of an upcoming gaelic football tournament. All the counties enter a team and the Dublin County team had made it to the semi-finals. All the athletes are professionally trained and though they don’t get paid, our tour guide said the athletes are pretty much guaranteed a job for life because of the prestige that comes with playing on the team.

After the tour ended, we made our way to a section of Dublin where there were a lot of Irish pubs and restaurants. We ended up eating at a place called O’Neil’s and I had some of the best fish ‘n’ chips I’ve ever tasted. A few of the others who were with me had Shepherd’s Pie, which they said was fantastic as well. 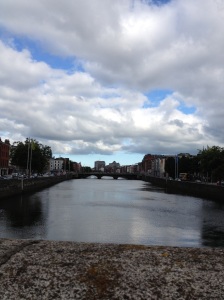 My trip to Ireland started on August 23 in Newark airport, where the main group flight left from. Our flight left at 9 p.m. and it took us about six hours to get to London’s Heathrow Airport. Once there, we dropped off one of our bags to be put in storage and then headed to a different terminal to catch a flight to Dublin.

We flew on Aer Lingus and one of the cool things about this carrier is that they said the announcements in both Irish and English. The other, even cooler, thing is that their seats were much more comfortable and roomier and almost everyone slept through the hour-long flight. It was raining when we left London, but it had cleared up by the time we broke through the clouds over Dublin and I was able to get my first view of Ireland through the airplane window.

Anyways, the plane finally landed, we went through customs, got our luggage and then got on the bus to head to Trinity College, where we would be staying in Dublin.

Trinity College is located right in the heart of Dublin and has a very beautiful campus with a lot of cool old buildings. As we rolled our bags through campus to our rooms we walked past some fields where people were playing Gaelic Football, which as far as I can tell is a mixture of football (soccer) and rugby.

After a short orientation that night, we had dinner and were then able to walk around Dublin a little bit before giving in to the jet lag (Ireland/England is 5 hours ahead of New Jersey). Dublin is the biggest city in Ireland but its narrow streets and unhurried nature make it feel much smaller at times. We of course had to go have a pint of Guinness at one of the local pubs and, on the way back, we even stumbled upon an ice cream shop that sold Guinness ice cream! 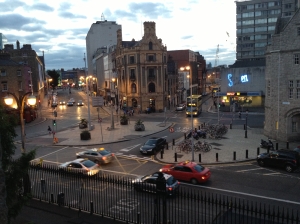 The view from room at Trinity College.

Hello all, I have finally arrived in London!

I have to apologize for the lack of updates as the hotel we’re currently staying at does not have free wifi so it’s been harder to find time and internet to update this blog.

I arrived in London Monday afternoon and spent the previous 10 days visiting Ireland and Northern Ireland as part of a pre-semester class. My experience in Ireland was amazing and I’ll be putting up a few blog posts in the next couple days talking about that trip.

We’re currently staying at the St. Giles Hotel, which is right off of Oxford Street in Central London. On Saturday, I’ll be moving into the flat I’ll be sharing with four other SU students for the rest of the semester. The flat is on the top floor of the building (penthouse!) and has a nice terrace, three bedrooms, a kitchen and a nice living room space with couches and a TV.  The flat is located near the Notting Hill area and a few blocks from Hyde Park (for those who are Tube-literate, the nearest stop is Queensway). Pictures to come on Saturday.

I’ll be taking my classes at Faraday House, SU’s center in London. Faraday is about a 10 to 15 minute tube ride from my flat and is located in the Bloomsbury section of London. Classes start on Monday and I will only have class Monday through Wednesday. In addition to the Ireland prequel class, I will be taking four other classes: Contemporary British Politics, America: A Foreign Perspective, Race, Gender and the Media, and Food, Culture and Identity.

The Thames River at night

I’ve been pretty busy looking for a flat and getting settled in London since I got here but we did have some time yesterday for some late night sightseeing. We walked down to St. Paul’s Cathedral then walked along the Thames River, crossed over a bridge and then walked to the London Eye before finding a pub to talk and rest from our mini walking tour. London is beautiful at night and there is so much to do. I think I’m going to love it here. 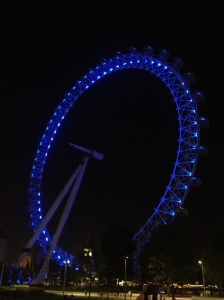 On August 23, I will leave to spend a semester studying abroad in London. Follow my travels here.