Today was spent enjoying the Irish countryside. It really is beautiful out here and it looks like the Ireland you see in postcards: rolling green hills, white waves crashing against stony cliffs and more sheep than I have ever seen before in my life. 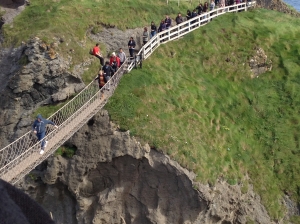 It was about a two-hour ride to get to our first destination: the Carrick-A-Rede rope bridge. Once we got there, it was about a 15-minute walk along the ocean and some terrifyingly high cliffs to get to the bridge. The bridge is actually made of sturdy cable now, not rope and runs a short distance between the main cliffs and a small island outcropping. It was not as long or as scary as I thought it would be (though many members of our group would probably beg to differ on that point). It was quite windy the whole time and we all had to put on extra layers.

We had lunch at the Wee Cottage, where the owner shut down the whole place for us. The cottage was decorated with all kinds of knick-knacks and the walls were covered in different types of currency from all over the world. Lunch was homemade soup, sandwiches, Irish soda bread, tea and coffee, and, to top it all off, decadent scones topped with heaps of whipped cream and berries. We were all stuffed.

From there, we walked down the hill to visit the ruins of Dunluce Castle. The castle was inhabited by various Irish and Scottish families over the centuries. It was eventually abandoned because it was too close to the edge, too drafty and had become out-dated. Although much of the original castle walls had collapsed or crumbled it was easy to picture how grand it must have been in its prime.

Our last planned stop for the day was the Giant’s Causeway, an area filled with stacks of these peculiar, flat six-sided rocks. The causeway was created either by giants or by volcanoes, depending on how strong your imagination is. It was about a 25-minute walk to get down to the main area of the causeway and once there, we joined the other tourists in clamoring about on the rocks and getting slightly wet from the spray of the sea. There were also some paths leading up to the cliffs that a few members of our group walked up.

On the bus ride back, we made one last quick stop: at a bunch of trees where they filmed part of the Game of Thrones TV show. Those who watched the show had a chance to get out of the bus and take a quick picture before we continued on our way back to Belfast.