…especially in London! Thanks to my school offering lots of really cheap theater tickets, I saw five shows in eight days this week at three different venues. 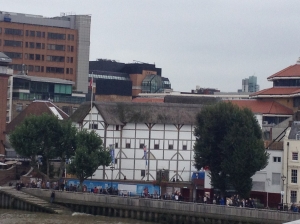 View of the Globe Theater from the Millennium Bridge (white building).

On Thursday, I saw the first of two shows at the Globe theatre: Shakespeare’s “A Midsummer Night’s Dream.” The Globe is a really cool venue that is an approximate copy of what it would have looked like in Shakespeare’s time. And the fact that it exists is really thanks to…Joe McCarthy and HUAC? Yep. The Globe was built by Sam Wanamaker, an American actor who was blacklisted in the 1950s due to his affiliation with the Communist Party. He came to England and made restoring the Globe his life’s work. Like in Shakespeare’s day, most of the seating in the Globe is standing and the theater top is open so if it’s raining, you better bring a jacket! Standing ticket cost only 5 pounds, which is a real bargain considering the quality of the shows they put on.

People wait for “A Midsummer Night’s Dream” to start at The Globe.

I had never seen or read “A Midsummer Night’s Dream” before but I really enjoyed the show. The actors were hilarious and it was a really fun time. Two days later, I saw “Macbeth” at the Globe, which was also a great but different experience. Macbeth is one of my favorite Shakespeare plays and I’ve read it a few times but this was the first time I saw it performed. The actors did a fantastic job here as well and I really enjoyed it. As a bonus, the show featured Billy Boyd (Pippin in Lord of the Rings) as Banquo. He did a great job! 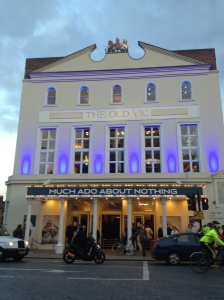 “Much Ado About Nothing” at the Old Vic.

In between these two shows at The Globe, I also saw “Much Ado About Nothing” at the Old Vic, which turned out to be the one major disappointment of the week. The play was an updated version, which usually turns out either really well or falls really flat. This version starred James Earl Jones (The voice!) but the production as a whole was kind of dull and unexciting. The director made some interesting set choices as well, which didn’t help. (The entire set consisted of a giant polished wood square archway set up in the middle of the stage.)

So, London’s theatre record was no longer perfect, but it was definitely redeemed with a really outstanding performance of “Othello” at the National Theatre on Wednesday. This version of Othello was an updated version as well but the director pulled it off really well. The set, which consisted of two barracks houses could be moved around in all kinds of different configurations, which was really cool. The cast was also great, particularly the actors who played Othello and Iago.

The view from outside The National Theater.

The National Theatre itself is a neat place as well. It has multiple levels and multiple theaters inside and a cool complex outside. It’s also literally right next to the Thames and it was nice to sit outside and watch the river for a little bit since I got to the theatre early.

My week at the theatre ended with seeing “Spamalot” at the Playhouse Theatre in the West End. “Spamalot” is a loving rip-off of “Monty Python and the Holy Grail” and is a very silly show. I saw it when it was on Broadway several years ago and this British version was even more over the top than I remembered. But, it was a great way to end a week at the theatre!

Spamalot at the Playhouse Theater.