My trip to Ireland started on August 23 in Newark airport, where the main group flight left from. Our flight left at 9 p.m. and it took us about six hours to get to London’s Heathrow Airport. Once there, we dropped off one of our bags to be put in storage and then headed to a different terminal to catch a flight to Dublin.

We flew on Aer Lingus and one of the cool things about this carrier is that they said the announcements in both Irish and English. The other, even cooler, thing is that their seats were much more comfortable and roomier and almost everyone slept through the hour-long flight. It was raining when we left London, but it had cleared up by the time we broke through the clouds over Dublin and I was able to get my first view of Ireland through the airplane window.

Anyways, the plane finally landed, we went through customs, got our luggage and then got on the bus to head to Trinity College, where we would be staying in Dublin. 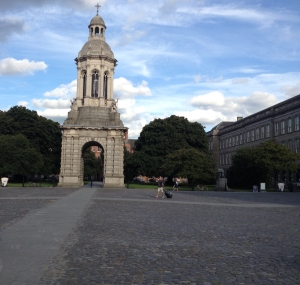 Trinity College is located right in the heart of Dublin and has a very beautiful campus with a lot of cool old buildings. As we rolled our bags through campus to our rooms we walked past some fields where people were playing Gaelic Football, which as far as I can tell is a mixture of football (soccer) and rugby.

After a short orientation that night, we had dinner and were then able to walk around Dublin a little bit before giving in to the jet lag (Ireland/England is 5 hours ahead of New Jersey). Dublin is the biggest city in Ireland but its narrow streets and unhurried nature make it feel much smaller at times. We of course had to go have a pint of Guinness at one of the local pubs and, on the way back, we even stumbled upon an ice cream shop that sold Guinness ice cream!

The view from room at Trinity College.